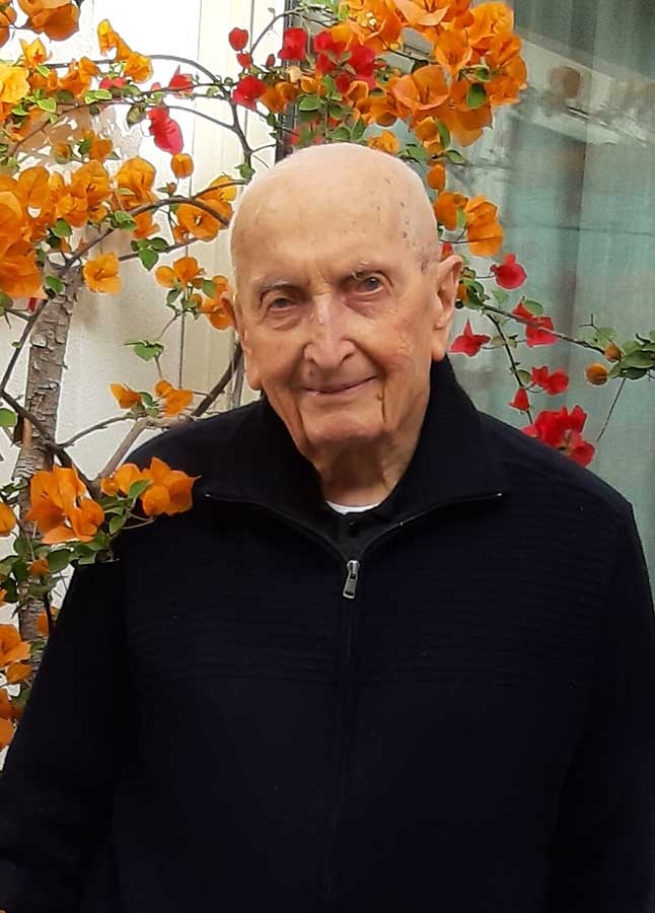 (ANS - Rome) - One hundred candles for Fr Agostino Favale, SDB, who turns 100 today, 20 May. Born in Ceresole d'Alba (Cuneo, Italy) he developed his vocation as a Salesian in mission land, in Mato Grosso, Brazil, before returning to Italy in 1947 where he was ordained and completed his studies at the Gregorian University and the Salesian Pontifical Athenaeum (PAS) of Turin, where he also taught Medieval, Modern and Contemporary Ecclesiastical History. In 1965, with the birth of the new Salesian Pontifical University in Rome, he moved to this new institution and became the first Director of its Institute of Spiritual Theology.
One of his concerns was always to integrate study with pastoral action, within the limits allowed by his commitment as a professor. While still teaching in Turin, he dedicated himself to the catechesis of young people and adults, the preaching of courses of spiritual exercises, Sunday apostolic activity, and spiritual assistance in summer camps for young people.
At the request of several Rectors Major - Fr Ricceri, Fr Viganó - he was invited several times to hold Spiritual Exercises, ongoing formation courses, and conferences all over the world and to many groups of the Salesian Family. As Director of the UPS Theological Institute, he promoted meetings at the central level; the "Weeks of Salesian spirituality", which began in 1973 and consolidated from year to year.
He has 19 books to his credit, some of which have also been translated into other languages, about twenty in collaboration as curator or editor - including the 15-volume Magisterium Conciliar Series - and many other books as co-author, as well as over 140 titles of contributions in books and articles in dictionaries and magazines.
He was a consultor to the Congregation for the Causes of Saints and to the Congregation for Institutes of Consecrated Life and Societies of Apostolic Life. But above all, his work has left an indelible mark on generations of students, for his always attentive imprint to the human dimension.
After teaching non-stop for 46 years, between PAS in Turin and UPS in Rome (February 1954 - February 2000), he stopped direct teaching, while continuing to receive requests for other lessons.
Fr Favale, always lucid, reflective, deeply human, authentic religious and convinced Salesian - he is credited with the affirmation: "before the Salesian religious comes man" - since 2014 he has lived in the UPS "infirmary".
"All past and present members of the Institute, we feel indebted to those who gave life to this beautiful tree 46 years ago, which today reaches all five continents with its branches thanks to the presence of alumni, men and women. In the name of each of them, we cry out forcefully: 'Thanks, Don Favale! May the Lord bless you for all the good you have done,'" Fr Jesús Manuel García Gutiérrez, Professor at the UPS Spirituality Institute, said today.