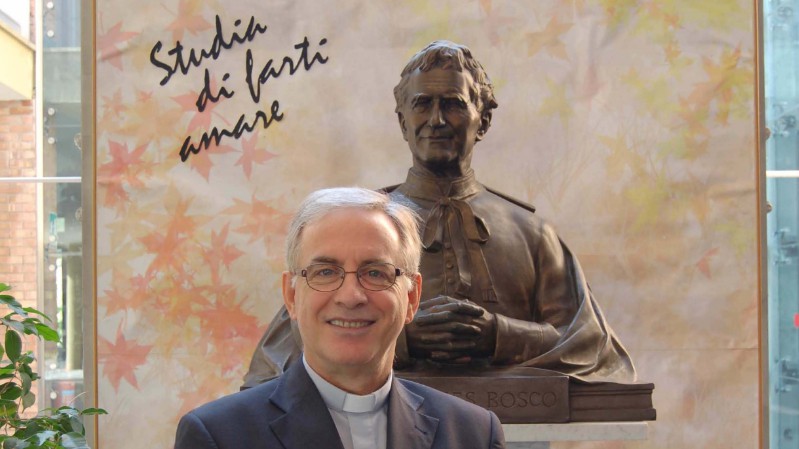 Today 19 July 2020 at 6:30 in the morning, prof. Don Carlo Nanni, SDB, magnificent rector emeritus of the UPS (2009-2015), passed away at the age of 75. The sad announcement was don Alvaro Forcellini, director of the Salesian community of the parish of Santa Maria della Speranza, adjacent to the UPS campus, where don Carlo had been transferred in September 2018. Here, don Carlo had primarily dedicated himself to the commitment parish ministry while continuing to provide its service to the UPS until the start of the lockdown due to the health emergency for the pandemic. Last May, his health conditions, following the fracture of his femur and his subsequent hospitalization, began to cause serious concern, highlighting the advanced state of a serious illness that led him, with moments of intense suffering while being alleviated by continuous presence and affection of his family and his confreres, to conclude his earthly journey. The funeral will take place on Tuesday 21 July at 11 am in the Church of Santa Maria della Speranza Via Francesco Cocco Ortu, 19 Rome.

Don Carlo Nanni, born in Ischia di Castro (Viterbo) on April 3, 1945, had become Salesian in 1962 and had been ordained a priest on March 18, 1975 in Castelgandolfo (Rome). Having graduated in Philosophy on June 27, 1968 at the Salesian Pontifical Athenaeum, and in Theology (patristic specialization and history of dogma) on the Pontifical Gregorian University on June 12, 1975, Don Carlo also obtained the Italian State Degree in Philosophy on March 26, 1973 at the University of Rome La Sapienza with a thesis in cultural anthropology entitled "The culture of origin in the urbanization process". In his formation he has always felt strongly the need to combine civil secularism and ecclesial community, incarnation in the territory and the search for "Roman" Catholic universality, ecclesial belonging and active citizenship, commitment to the social and research of the Kingdom of God and his justice, pastoral concern and closeness to the experiences and existential paths of young people, people and families in their concrete conditions of life.

He began his teaching activity in the Faculty of Educational Sciences starting from the academic year 1976/1977 with lessons relating to the philosophical part of the General Theory of Education course; from that moment his appreciated and passionate university teaching was constant until this academic year. Don Pietro Braido (Rector of the UPS in the years 1974-1977), indicated Don Carlo as his successor in the Chair of Philosophy of Education. Going back over the years of his life and in particular those of his activity at the UPS, one cannot help but be admired for the constant and generous dedication with which Don Carlo carried out his academic teaching, research and institutional commitment service. In 1980 he took on the position of Co-Director of the magazine "Pedagogical Orientations" and Pro-Director of the Institute of Pedagogical Methodology, the following year as Secretary of the Faculty. Appointed extraordinary teacher on 8 September 1984, he was promoted to Full Professor in the Faculty of Educational Sciences on 8 September 1989; for many years he was the youngest ordinary professor at the university. In 1992 he was appointed Vice-Dean of the Faculty, and on April 24, 1995 he began his first term as Dean, then reconfirmed for a second three-year period (1998-2001) on April 24, 1998. He was again appointed Dean of the Faculty of Educational Sciences. during the summer of 2008, an assignment that took him only for a year, until with the Decree of the Congregation for Catholic Education dated 5 June 2009, he was appointed magnificent Rector of the UPS from 1 July 2009 until 15 July 2015 .

In addition to the teachings of his chair, followed very closely by students and other teaching assignments outside the UPS at the Diocese of Rome and the University of Perugia, Fr Carlo Nanni followed the curricular reform of the CNOS / FAP training centers for the field of general culture and was part of courses for support teachers, refresher courses for middle and high school teachers and contributed to the curricular reform of the teaching of Catholic Religion in High Schools. From 1999 to 2012 he was also Central Ecclesiastical Consultant of UCIIM, the Association of Catholic teachers of middle and high school founded after the war by Gesualdo Nosengo, taking care of the didactic and spiritual updating. He has also been a member of committees and scientific departments of numerous pedagogical and youth pastoral journals, giving his personal and appreciated scientific and sapiential contribution: something moreover evident from his vast production of books, articles, essays in collective volumes, voices of dictionaries, texts of philosophical and pedagogical dissemination, research on local, civil and ecclesial history, of its places of origin. He has always committed himself to reading the problems and challenges of our time, in a pedagogical and educational key, and those of the youth situation in particular, subjecting the traditional and current theoretical-cultural models to close criticism, making philosophical reason interact, reflection of faith and intellectual tension for an integral and plenary civil and democratic life open to transcendence. He also offered a valuable and competent contribution for the elaboration of important documents, such as for example the "Pastoral Guidelines" of the Italian Episcopate for the decade 2010-2020 (Educating for the good life of the Gospel) and the aid for reflection and the action published by the Congregation for Catholic Education published in the year of the Jubilee of Mercy (Misericordiosi educando).

Despite the remarkable teaching and management commitments of the UPS academic life, Don Carlo Nanni has never neglected the direct pastoral care of people, through confession and spiritual direction, the offer of the presbyteral ministry in parishes, youth centers, institutes. male and female religious, help to his parish of origin, joint preaching at formative-cultural conferences, always with clear pastoral-educational intentionality.

Completed his dual mandate as a magnificent Rector of the UPS, and awarded by the Grand Chancellor of the UPS, on 20 October 2015, after the completion of his 70th birthday, the title of Emeritus Professor of the Faculty of Educational Sciences of the UPS , Don Carlo Nanni continued his service for the University through teaching, the Directorate of the UPS Historical Archive and the Codirection of the magazine "Pedagogical Orientations".

It is unanimously recognized that the six-year term of Don Carlo Nannid's Rectorate was characterized by a truly Salesian style, made of attention to students, to the personal and professional life of colleagues, to the promotion of relational and procedural styles institutionally correct and animated by true family spirit and promoting co-responsibility at all levels. With the contribution of Don Carlo Nanni, the UPS has not only grown considerably from the numerical point of view of students and has qualified increasingly and better in its training proposal and for appropriate cultural initiatives, but has also achieved a complex generational change in the teachers, sought the adaptation of statutory and regulatory legislation and regulations, renewed the service infrastructures and renovated the campus habitat in several parts.

We thank the Lord for having donated Don Carlo Nanni to the University and the Salesian Congregation, and we entrust him to the Fatherd's mercy.